Sporting elegance with a rich tradition since 1926

Hunting with The Camden Hunt

Details about hunts, gatherings, and other social events.
Check Calendar

Recognized by the Masters of Foxhound Association in 1926, we maintain a professional huntsman and a kennel with 20 to 25 couple crossbred English and American hounds.

The terrain is a mix of lush swamps, hardwood forests, and mature pine woods. The footing is mostly sandy and very horse friendly. The area is part of the sand hills region of the Carolinas and has always been a favorite destination for horsemen of every equestrian discipline. Camden’s historical past, and its rich tradition of steeple chasing provide a backdrop of sporting elegance that harkens to an earlier time.

We are pleased to bring you news of two very exciting developments.

First, Firestone-Thiel Land Foundation has just renewed its lease to us for five years which means, combined with the Lloyd Family property and that of General Julian Burns, your Camden Hunt has the extraordinary privilege of continued fox hunting on the vast and sacred lands we love and know as Camden Hunt Country.

Second, our Hunt Chairman Sue Sensor has this month completed a land transaction in which she personally gifted to the Firestone-Thiel Foundation 17.75 acres (valued at$337,300) which constitutes a “gateway” to Camden Hunt Country. In addition to this, is a second gift by Sue, her husband George and two other families of the adjacent 7.90 – acre parcel (valued at $150,100) which includes the Dale Thiel Riding Ring (Camden Hunt Show Grounds).

The above properties are included in the new 5-year lease by Firestone-Thiel Foundation and therefore will directly benefit your Camden Hunt. Our letter to you provides you with more information and includes beautiful photographs of these properties.

Facts You Should Know

Our website letter to you also provides you with the true and correct facts you should know regarding the lawsuit your Camden Hunt was forced to bring against five individuals who wrongfully attempted to seize control of the corporation in direct violation of the way Dale and Judy Thiel organized and endowed it in 2012. The Circuit Court has ruled, by court order, the actions of these five individuals were devoid of any legal authority and violated and interfered with the rights of the Masters of the Hunt as the lawful directors of the corporation.

In view of inaccurate and misleading information, we believe may have been circulated, we sincerely urge you to review the website letter in order to be fully informed about this matter.

Our traditions ensure a great hunt for everyone.

By following our time-honored rituals you can partake in a little slice of history. 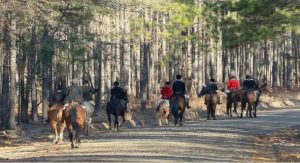 Results are Posted!, see the results tab on the menu! Thanks to all who came and joined us for The Camden Hunt Spring Hunter Pace

Check out the great items for sale to benefit the Camden Hunt and Hounds. Auction has started, and runs through March 6, 2021! https://www.32auctions.com/camdenhunt2021 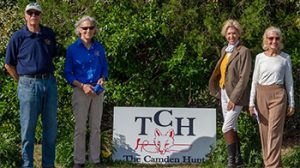 The Camden Hunt would like to welcome Janet Butcher and Richard Osworth as Joint Masters!

Experience the thrill of the chase.

We are one of the oldest and most experienced foxhunting clubs
in South Carolina.